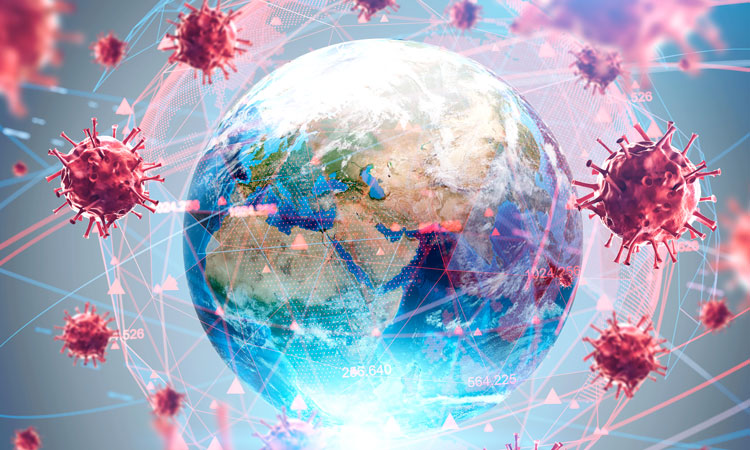 Worldwide coronavirus cases continue to surge to around 40 million, growing at a rate of about 1 million every three days.

Since the first cases were identified in Wuhan, China in December 2019 infections have grown to 40,229,438 in tracking by Worldometers.info and 39,845,660 by Johns Hopkins. With a mortality rate of 2.8%, the death toll stands at 1,117,540, according to Worldometers. Infections have been increasing by around 1%, which is double the fatalities.

Coronavirus has been especially spiking in Europe, where the virus was largely contained a few months ago.

The British government is considering a “circuit-breaker” lockdown to control the outbreak. This move has been backed by the opposition Labor Party but opposed by the cabinet.

“It would seem an error to try to impose on every part of the country the same level of restriction when we know that the disease is spreading more intensively and quicker in some parts of the country,” UK Cabinet Office minister Michael Gove said Sunday.

He added that the epidemiology is “different” this time.

Italian premier Giuseppe Conte announced new restrictions, including giving mayors powers to close specific public areas after 9 p.m. as well as the size of groups to congregate. Restaurants and bars/pubs most close by midnight with only table service allows from 6 p.m.

Conferences and local festivals are suspended with no contact sports allowed.

“We cannot waste time, we must put in place measures to avoid a generalized lockdown, which could severely compromise the economy,” said Conte. “The most effective measures remain the basic precautions: mask, distance and hand hygiene. We must pay attention to situations where we let our guard down — with relatives and friends. In these situations, the maximum precaution is required.”

In Spain’s Catalonia region around Barcelona, bars and restaurants have closed. Spain has 33,775 deaths and reported no data this weekend after announcing 222 deaths and 12,169 cases, behind the record 14,087 on Sept. 18.

Like elsewhere in Europe, Paris and eight other French cities with a population of about 20 million were empty as a new curfew was enforced. The month-long curfew runs from 9 p.m. to 6 a.m. nightly.

Russia has ruled out a full lockdown with bars and restaurants remaining open. But in Moscow, children in first to fifth grade will be placed in remote learning for two weeks when they come back from school holidays on Monday.

India has led the world in daily reported deaths and cases. On Sunday, the nation announced 85,529 new cases as well as 1,033 deaths. Until Saturday deaths were in triple digits since Oct. 2. India holds the world record for most cases in a single day with 97,894.

Israel has begun easing its restrictions after reporting low cases, 141 Sunday after 874 Saturday. The peak was 11,316 on Sept. 23, two weeks after Rosh Hashanah.

“If we all follow the rules, then I am certain that this will work,” Prime Minister Benjamin Netanyahu said. “Another thing, I have said that if it appears that it is not working, if it appears that we are going backwards, then we will have no choice but to retighten the restrictions.”

Easing includes allowing people to venture more than from their homes with natural parks and beaches to reopen. Also, restaurants can serve takeout instead of just delivery.

The pandemic in the Far East has subsided, including China, the original epicenter with 4,634 deaths and none since April 26, as well as 85,672 cases with 13 more Sunday.

South Korea announced one death Sunday for a total of 444, as well as 91 cases. On Aug. 2 it reported 441 cases and its high since April was six.

On Monday, South Korea relaxed some rules on social distancing, allowing nightspots to re-open and spectators to attend sports events. But South Korea is mandating masks at all crowded facilities, on public transport and at demonstrations.ADVERTISEMENT

But the nation of nearly 213 million has conducted far fewer tests than other nations, around 17.9 million for an average of 84,035 per million compared with 376,564 in the United States.

In North America, all but around 14,000 deaths are in the United States, Mexico and Canada.

Borders among the U.S., Mexico and Canada remain closed through Wednesday but Canadian Prime Minister Justin Trudeau expects that ban to last much longer.

“The U.S. is not in a place where we would feel comfortable reopening those borders,” he told the hosts of Smart Start, which airs on Canada’s Global Television Network. “We will continue to make sure that Canadian safety is top of mind when we move forward. We see the cases in the United States and elsewhere around the world, and we need to continue to keep these border controls in place.”

In the worst shape are the provinces of Quebec and Ontario.

“I think this second wave is really exhausting,” Trudeau said. “It’s frustrating for everyone to have to keep going through this. We showed that we can pull together and get through this, as we did in the spring. Then people got used to the slow burn in the summer. Now that cases are spiking again — with the approach of winter, with the approach of flu season — we need to get things back under control.”

He added, however, that he believes the situation is different this time around.

“We know how to do it in a more targeted way now than in the spring,” Trudeau said. “We know what kinds of businesses are more likely to spread COVID-19, what kinds of activities.”

The outbreak never was severe in Oceania.

Last week New Zealand reported its first community case — as opposed to being imported — in Auckland on Sunday for the first time in three weeks.

On Saturday, Prime Minister Jacinda Ardern won by a landslide in a general election in response to her government’s handling of the response to the pandemic.ADVERTISEMENT

A lockdown in Australia’s Victoria ended after more than 100 days for the 5 million residents. They will be allowed to travel as far as 16 miles from home. On Nov. 1 the lockdown will be totally lifted, including most businesses allowed to reopen.

“These lockdowns have come with pain and damage and hurt, but the strategy is working,” Victoria’s Premier Daniel Andrews told reporters. “As other parts of the world are going into a deadly winter, with lockdowns and restrictions that are heartbreaking.”

Summer starts on Dec. 1 in the Southern Hemisphere.