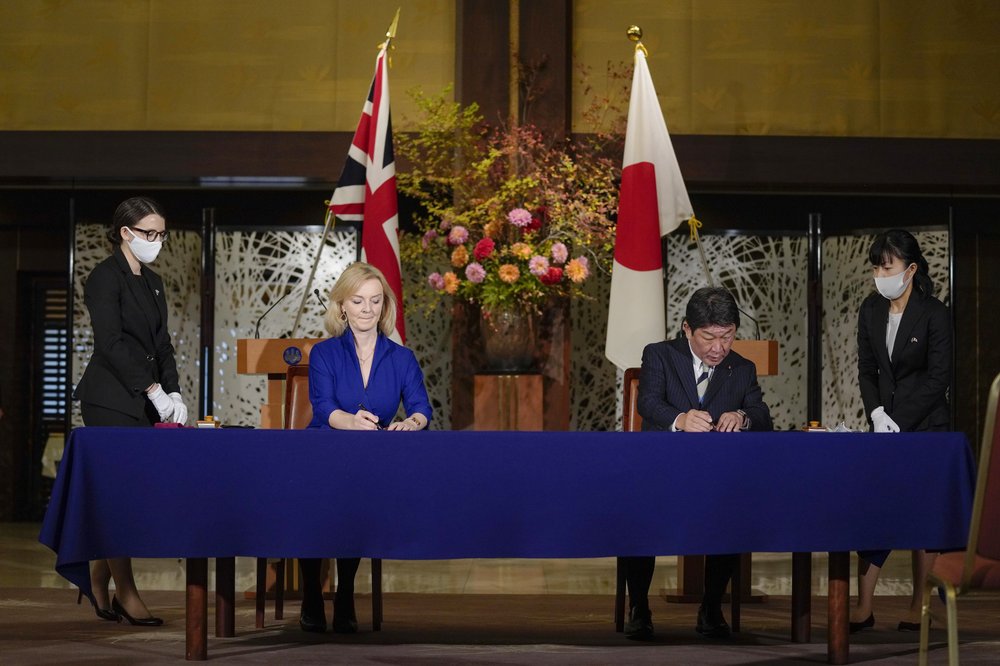 “How fitting it is to be in the Land of the Rising Sun to welcome in the dawn of a new era of free trade,” British International Trade Secretary Liz Truss told reporters at a signing ceremony in Tokyo.

Appearing with Japanese Foreign Minister Toshimitsu Motegi, Truss called the agreement a “landmark” as the first major trade deal for Britain as it becomes once again an independent trading nation.

The deal, expected to boost British trade with Japan by 15 billion pounds ($19.5 billion) annually, will also make it easier for British companies to operate in Japan.

Motegi said the bilateral deal ensures continuity with the earlier European agreement and adds new areas for cooperation such as e-commerce and financial services.

The British government says the ability to strike free trade agreements around the world is one of the main benefits of Brexit. But the new deal largely replicates the trade agreement Britain had with Japan as part of the EU.

Britain’s opposition Labour Party has estimated it will increase U.K. GDP by 0.07% – far less than the predicted fall in trade with the 27-nation bloc.

Britain is seeking to secure deals with other countries, notably the United States, but talks are proceeding slowly.

Parliamentary approval is needed in both nations before the agreement takes effect from the beginning of next year. It’s expected in Japan next week, as the ruling party controls both houses of parliament.

Japan already exports about 1.5 trillion yen ($14 billion) of goods to Britain each year, mostly autos, auto parts and other machinery. It imports nearly 1 trillion yen ($9.5 billion) from Britain, including pharmaceuticals, medical products and cars, according to the Japanese Foreign Ministry.

Tariffs on Japanese autos will be removed gradually and won’t become eliminated until 2026. That matches Japan’s arrangement with the EU.

Japan has repeatedly expressed concern about the likely impact of Brexit on Japanese businesses in Britain, which include Hitachi, with plants making railway cars for East Coast trains, and Nissan Motor Co., employing several thousand workers at its Sunderland auto plant.

Business organizations in the U.K. welcomed opportunities to boost an economy hard hit by the COVID-19 crisis.

Motegi visited Britain in August, his first overseas trip amid the coronavirus pandemic, and stressed the importance of reaching a trade deal quickly.

“This will give a welcome helping hand to some of the country’s most innovative companies, which sometimes struggle to navigate the complexities of breaking through into new markets,″ Stephen Phipson, CEO of Make UK, the manufacturers’ organization. “Business looks forward to being directly and closely involved in the ongoing program of trade negotiations to ensure the best possible outcomes.”