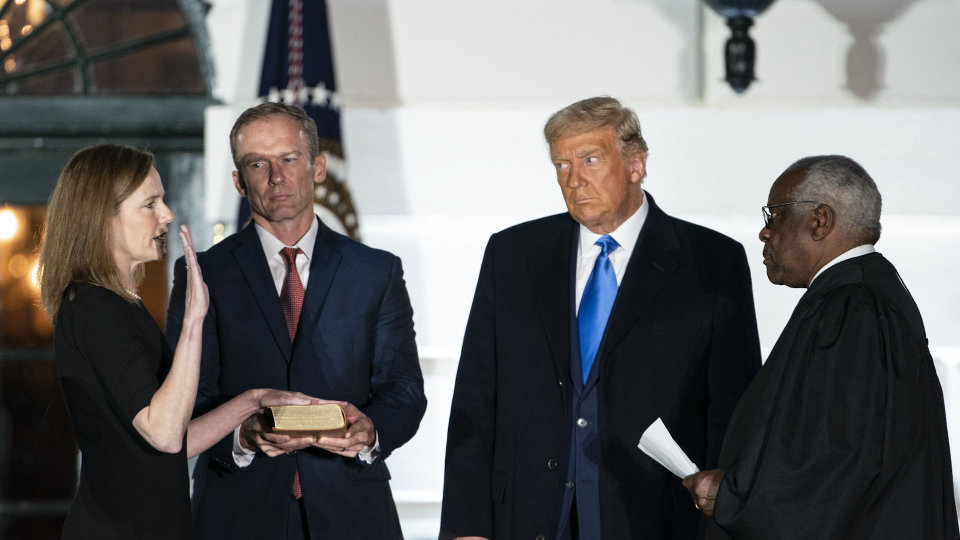 Amy Coney Barrett was sworn in as a U.S. Supreme Court justice on Monday night after the Senate voted to confirm her nomination earlier in the day.

Monday, the Senate voted 52-48 to confirm Barrett to replace the late Justice Ruth Bader Ginsburg, who died of cancer on Sept. 18, and she was sworn-in by Justice Clarence Thomas during a ceremony outside the White House.

Chief Justice John Roberts will administer the judicial oath Tuesday at the Supreme Court, allowing her to “begin to participate in the work of the court” and giving conservatives a 6-3 majority on the high court bench.

“It is a privilege to be asked to serve my country in this office and I stand here tonight truly honored and humbled,” Barrett said on camera.

During Monday night’s ceremony, Barrett pledged that she will make her rulings free of political influence.

“The oath that I’ve solemnly taken tonight means at its core that I will do my job without any fear or favor and that I will do so independently of both the political branches and of my own preferences,” she said. “I love the Constitution and the democratic republic that it establishes and I will devote myself to preserving it,” she added.

Barrett is the third Supreme Court justice appointed by President Donald Trump since he took office in 2017.

Trump noted Ginsburg as “a true pioneer for women” and said Barrett will be the fifth woman and first mother of school-age children to serve on the Supreme Court.