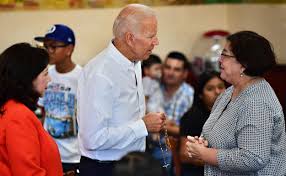 The poll’s findings show Biden holding a narrower advantage among Latino voters compared to Hillary Clinton at this point during the 2016 presidential race. In a November 2016 NBC News/Wall Street Journal/Telemundo poll, Clinton led Trump by 62% to 20% among registered Hispanic voters.

Some of the key findings include:

The NBC News/Wall Street Journal/Telemundo poll was conducted as part of Telemundo’s “Decision 2020” initiative, non-partisan multiplatform news and civic engagement effort to provide Latinos with comprehensive information and resources on this year’s election. It is the final Telemundo poll before the election, culminating a yearlong series of Telemundo local and national surveys focused on the Latino electorate.