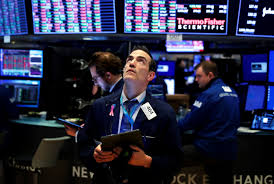 Stocks that would benefit from an economic recovery continued to climb as Boeing stock grew 5.2%, Chevron climbed 4.62% and Exxon Mobil increased 2.22%.

But, tech stocks that prospered during the pandemic, continued a decline as Zoom stock dropped 9.01%, Amazon fell 3.46%, Microsoft declined 3.38% and Google‘s parent company, Alphabet, ended the day down 1.35%.

According to Lindsey Bell, chief investment strategist at Ally Invest, “The ‘stay at home’ trade, which has led the market higher for most of this year, may be falling out of favor. There’s still a good long-term case for tech, but it may not outpace the rest of the market like it has since March.”

The Dow hit a record high early in trading Monday behind the strength of Pfizer and BioNTech stocks after the companies announced their COVID-19 vaccine is about 90% effective, but tech losses capped the gains at 834 points.

Optimism surrounding a vaccine and president-elect Joe Biden’s virus potential response has helped to drive the market higher but U.S. COVID-19 cases continue to rise as the nation added more than 100,000 cases for six straight days since Election day on  Tuesday.