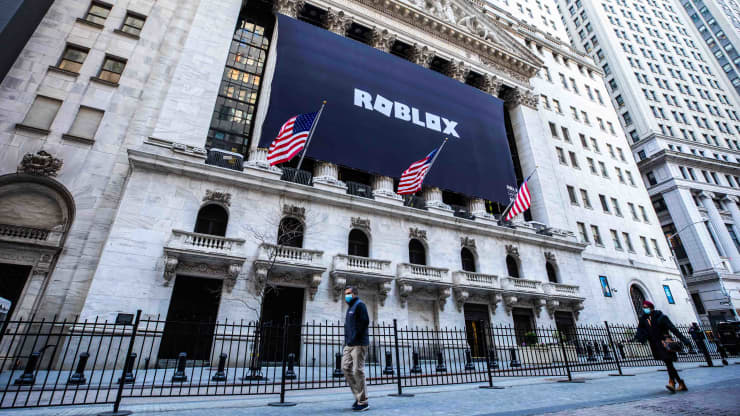 The kids gaming app, Roblox, which surged in popularity during the pandemic, started trading Wednesday at $64.50 on the New York Stock Exchange, giving the company a market cap of $35.5 billion.

Roblox went public through a direct listing, following the lead of other tech companies. Instead of raising fresh capital in exchange for new shares, Roblox allowed existing shareholders to sell immediately, without being subject to a lockup period.

The opening price on the NYSE represents a 43% increase from a private financing round in January, when the company sold shares for $45. The NYSE set a reference price on Tuesday of $45, though no stock changed hands at those levels. The reference price tends to reflect private market trading and does not indicate where a stock will open.

Based on a fully diluted share count of 652 million, which includes restricted stock units that will convert to common stock, the company is worth $42.05 billion.

Roblox hits the market coming off an explosive year of growth, primarily from children stuck at home because Covid-19 forced schools to close and sports leagues to shut down. Within Roblox, which is one of the top-grossing apps on Apple and Google devices, users create avatars that they can move between the millions of games on the service, navigating theme parks, adopting virtual pets and fighting enemies with their friends.

Revenue last year jumped 82% to $923.9 million. Still, Roblox’s net loss widened to $253.3 million from $71 million in 2019 as the company almost tripled the amount of money it paid to developers through its revenue sharing program. More than 1,250 developers made at least $10,000 last year through virtual sales in their Roblox games.