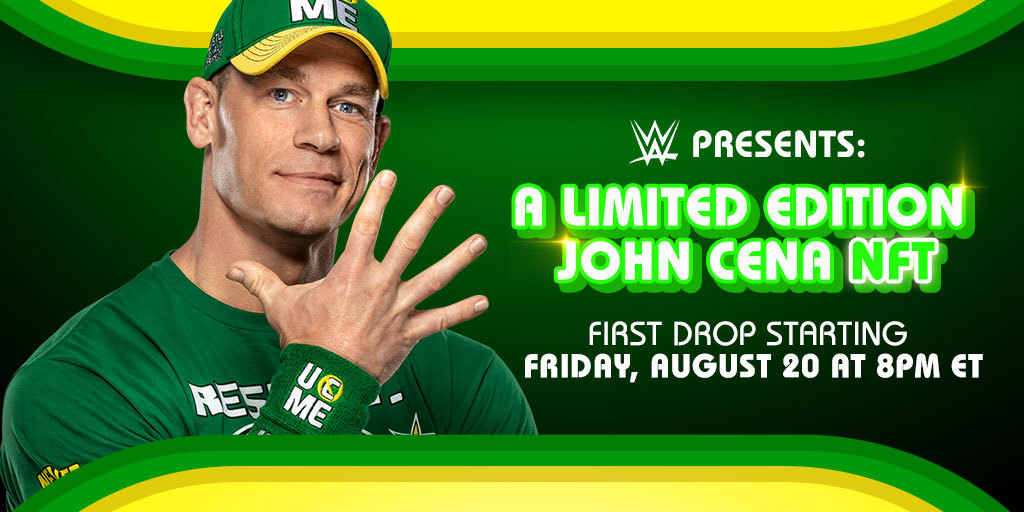 The WWE will create non-fungible-tokens (NFTs) inspired by WWE Superstar John Cena, along with never-before-sold memorabilia and experiences, just in time for SummerSlam.

The top bidder for the platinum tier will receive:

A one-of-a-kind NFT;
A once-in-a-lifetime experience for two at WrestleMania 38 in 2022 at AT&T Stadium in Dallas or WrestleMania 39 in 2023 at SoFi Stadium in Los Angeles, including two front row tickets, unprecedented VIP access and hotel accommodations;
A personalized WWE Championship Title Belt with the winner’s name engraved on the side plates;
John Cena’s “Dr. of Thuganomics” style chain from WrestleMania 35.
The gold tier will drop in time for SummerSlam this Saturday, August 21 and include 500 limited edition NFTs, along with a limited-edition merch box personally curated by Cena.

“The Summer of Cena will be capped off by a phenomenal main event at SummerSlam as well as an opportunity for the WWE Universe to own unique collectables inspired by one of the biggest stars in Hollywood today,” said Scott Zanghellini, WWE Senior Vice President, Revenue Strategy & Development.

SummerSlam will take place from Allegiant Stadium in Las Vegas this Saturday, August 21, marking the first time it has been held at an NFL stadium. The event will be headlined by megastar John Cena vs. WWE Universal Champion Roman Reigns. SummerSlam will stream live at 8 pm ET/5 pm PT exclusively on Peacock in the United States and on WWE Network everywhere else.